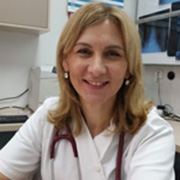 I was born on October 31st, 1964 in Sinj. I finished elementary school and high school in Zagreb.

I graduated from the Faculty of Medicine, University in Zagreb on July 15th , 1988. After my internship at the Sisters of Mercy University Hospital Centre (KBCSM), I passed the professional exam on April 13th, 1990. From year 1990 to 1992 I was a junior research assistant at the Clinic for Internal Medicine at Sisters of Mercy, under prof. dr. Šime Mihatov. At the Faculty of Science, University in Zagreb on December 18th, 1992 I defended master’s thesis entitled “The prognostic importance of left ventricular function indicators in five-year survival period after acute myocardial infarction“. From 1992 to 1996, I specialized in internal medicine at Sisters of Mercy in Zagreb and on July 3rd 1996 passed the specialist exam in internal medicine. Since then I work as a specialist in internal medicine at the Clinic for Internal Medicine of the Sisters of Mercy, in the Department for Cardiovascular Medicine. In May and June in the year 2000 I received training in transesophageal echocardiography at the Department of Cardiology, University Hospital of Hamburg-Eppendorf. Thereafter, I attended a three-day training course in cardiac pacing in Switzerland. On February 26th, 2004 I took a subspecialty exam in cardiology and on December 19th, 2007 I defended my PhD dissertation at the Faculty of Medicine, University of Zagreb, entitled “Effect of ATII blockers and calcium channel blockers on the Doppler resistance index, acceleration time and acceleration index in intrarenal arteries of patients with essential (primary) hypertension“. I have been the Head of the Department for the Cardiovascular Medicine of the Sisters of Mercy since November 2008. I have participated in several domestic and foreign scientific symposiums and professional meetings. I was elected to the scientific-teaching title of Assistant Professor at the Faculty of Medicine, University in Zagreb, at the Department of Internal Medicine in October 2009. I co-authored 21 published scientific papers, of which 11 were published in journals represented in Current Contest.

I have given a series of lectures at domestic and foreign symposiums. I have been a member of the Croatian Medical Association, since 2012 a member and vice-president of the Croatian Cardiac Society, a member of the European Society of Cardiology. My area of interest are echocardiography and cardiac pacing. I have been the Deputy Head of the Department of Internal Medicine, Faculty of Medicine, University of Zagreb since 2012.